Syngenta needs your help in deciding who will be the grand prizewinner of this year’s #RootedinAg contest.
Syngenta is grateful to everyone who entered the 2018 #RootedinAg contest. The stories they told about the people who most nourished their agricultural roots were heartfelt and inspirational. Although it was difficult, a panel of judges has narrowed the field of competitors to five finalists—each of whom has received a mini touch-screen tablet.

We now need your help in deciding who will be the grand prizewinner of $500 plus a $1,000 donation to the winner’s favorite local charity or civic group.* Check out the five entries below and vote for the one you think is most deserving. Your votes along with our judges’ scores will determine the winner. Online voting ends Sept. 15, 2018, with Syngenta announcing the grand prizewinner in October.

I grew up on a cotton farm in southeast Arkansas. The first word out of my mouth as a child was “tractor.” I followed my daddy around the farm from a young age. He was a good man and a hard worker who loved his family and loved the land. I was a freshman in college when he passed away from a heart attack in 1979.

I finished college in 1982 with a degree in agriculture, with an emphasis in plant and soil science. Since graduation, I've worked for an ag chem dealer in Pine Bluff; the University of Arkansas, doing cotton research for nine years; assistant manager of Delta Farmers Coop in Grady for 12 years; and in 2009, started my own business as a crop consultant.

I now consult in the same fields I pushed toy tractors around as a child. My daddy taught me how important it is to work hard and always be honest. I still miss him, and there's not a day that goes by that I don't think of him. I often wonder if he would be proud of the way I've lived my life, and what I've accomplished. Even though we were only together for a short time, he has been my biggest influence in what I've become. 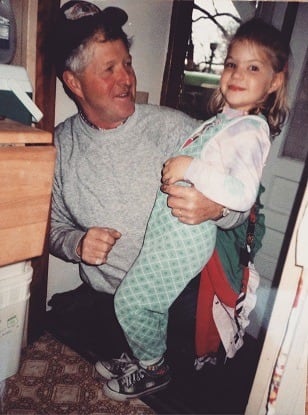 I can still vividly see my “first” agricultural memory. I am in the barn, awkwardly clutching a young, bottle lamb. My grandfather, “Papa,” is explaining to me how to keep its head up while it drinks. In that moment, I was not just a four year old, I was a farmer like my Papa. That desire to be like my grandfather did not stop there, and it continues to drive me to be the agriculturalist I am today.

While many of my lessons and time spent with Papa were with the livestock, I still craved knowledge for the other aspects of the fifth-generation farm. Throwing and stacking hay bales was not simply a test of endurance, but an opportunity for me to learn how the baler worked and how the cuttings differed from each other.

Though my grandfather is not as young as he once was, when I look at him, I still see the hands of a faithful farmer: hands worn by hard, physical labor; hands that have held life; hands that sowed the seed to feed the world; and hands that welcome me home. It takes deep roots to make it in agriculture, and I am so grateful to be able to model my own journey through agriculture after my grandfather’s.

I grew up spending summers on my grandparent’s farm, being active in FFA, with a desire to spend my future in agriculture. Twenty-five years ago, you didn't just "become a farmer," and when I told my mom, she replied, "Well, you better marry a farmer because that's the only way!"

Fast forward through time and various ag jobs and I finally met that farmer, Jason Moore. Throughout the past 10 years, I am forever asking questions and learning, and he is patient and explains. I may have taught him a few things about pigs and dairy cows, but he taught me about crops and why farmers do things the way they do. His drive for farming overflowed into my passion and gave me the power to make sure agriculture stays alive for ours and future generations.

My voice in ag is just as important as my work, if not more so. Connecting locally with our co-ops, women, schools and partner agencies makes a direct impact, but so is stepping up on the state/national level with farm organizations and legislative members. Jason has supported my efforts and is my go-to when something isn't clear or when I need clarification or another perspective. I couldn't do my advocating or know what I know on the farm without his guidance.

We work hands-on together with equipment, agronomy, marketing and our family. I already see in our children the foundation being made for a future in the ag industry because of Jason’s commitment to us and to agriculture. He has let me incorporate various cover-crop mixes on parts of our land for research, so that I have the experience and the basics personally before involving other producers. He agreed to a goal of reaching consumers by on-farm visits, so for four years our family sacrificed to establish a pumpkin patch for families and youth, which went amazing, until a tornado came through and destroyed everything.

He’s been there, through the struggles and blessings that come along with it all, but we've made it. He knows the importance of getting involved, but like many, may not have the knack to speak or are busy just living agriculture every day, so he supports my efforts and abilities to do it on his behalf. Jason Moore is why I am #ROOTEDINAG.

“You can do anything you want, you just have to be innovative.” These were words my grandfather spoke as he taught me how to use leverage to lift a motor. My grandpa, Carl Moore, bought his first section at the age of 17; at 18 he was drafted in the Korean War. He farmed through rough times, broke ground numerous times and raised his children to pursue their passions.

My grandpa continues to farm alongside my dad, uncle and cousins at 86 years old. I learned to operate a combine at the age of 12 under the guidance of my grandfather. He could fill hours with stories of his time overseas and explanations regarding a plethora of topics including the mechanics of engines. These conversations instilled my want to understand the world and apply this understanding to deriving creative solutions to agriculture. He inspired me to become active in FFA, be an agronomy intern for several summers and become involved in my community. My grandfather often discussed the importance of conservation and good stewardship in agriculture, particularly water preservation. Such conversations have driven me to pursue research aimed at optimizing irrigation water usage in my local farming community as well as study the efficient use of fertilizer and chemicals in production.

My grandpa’s unspoken support, persistence in the face of adversity and love for agriculture shaped me as a young female insistent on advancing innovation in the agricultural industry. His expertise stretches beyond farming to encompass persistence in the face of adversity, grit, kindness, wit and ingenuity. I attribute my own persistence and determination to my grandfather’s character and my fervor for agriculture to his experiences. His belief in my ability has been the cornerstone to my success, driving me to contribute to the agricultural community not only on my family’s dryland wheat farm, but also through my pursuit of a Master’s in Agricultural Economics, involvement in FFA and career in the agricultural industry.

Recently, my mom shared an article that announced the 40th anniversary of the Saratoga (New York) Farmers Market. It described the market’s history and founding. Most of the credit for starting the market was given to Mr. Albert Lounsbury, Saratoga County 4-H agent, and four local farmers.

Mom’s handwritten note in the margin kidded that they didn’t seem to recall my involvement. I had been an active 4H’er, and Mr. Lounsbury knew I was trying to start a small farm venture. His recommendation letter factored significantly in my acceptance into Cornell. After my freshman year, he invited me to help the group start a farmers market. I participated in some meetings, and a high school classmate and I painted the first sign for the new market. Honestly, my role was very minor in the ultimate success of the market. However, I suspect Mr. Lounsbury saw that my farming entrepreneurship skills might suggest another career path.

I came to realize that his quiet, subtle mentorship was teaching me how to work with community groups, to organize projects, to educate farmers, to become the successful county agricultural agent that I’ve been for 35 of those 40 years since the Saratoga Farmers Market opened. That’s why he’s the person who most inspired my agricultural roots.