Working alone and without fanfare, field development scientists test active ingredients and teach agriculture – within and outside the industry.
By Amy Campbell / Photography by Patrick Priest
Steve, David and Jeannette come from different backgrounds, live in different regions of the country, and work with different plant varieties as crop protection field development (CPFD) scientists for Syngenta. But they have something in common: nobody understands their job.


“The chemists narrow active ingredients down by looking at the products in greenhouses and growth chambers, but that’s not the real world. We’re the first step in looking at products in a living biological environment — soils, direct sunlight, rainfall.”


To those outside agriculture, CPFD jobs are even more of a mystery. David Black, a senior research development scientist, works with crops in Arkansas. Black says friends are often surprised to learn that plants get diseases and that a Ph.D. in weed science is a real thing.

However, CPFD scientists are a crucial link between the development of Syngenta products and getting them on the market, running trials to see whether active ingredients that look promising in the lab will work in the field. It’s a big job, and there’s plenty to do every season — or year-round in Jeannette Rapicavoli’s territory, Southern California and Arizona.

“In the desert, it doesn’t rain much, and it certainly doesn’t snow or get very cold, so there are always crops going into the ground,” says Rapicavoli, CPFD research and development scientist. “It keeps us very busy out here.”

In the Midwest, if CPFD scientists aren’t planting, they’re planning. Early in the year Mroczkiewicz, who primarily works with corn and soybeans, is prepping his summer trials, doing the paperwork and stocking up on supplies.

“I’ll have somewhere from 30 to 35 field trials in a typical year, usually in several different locations,” he says. “I initiate those, make all the applications, and spend my very hectic spring and early summer keeping up with them. Weekends really don’t have much meaning for us during that time.”

From there, he’s occupied with establishing trials, and then managing them so he can collect performance data.

From Lab to Land

CPFDs are essential in ensuring prospective agronomic solutions have on-farm viability. Syngenta chemists in Basel, Switzerland, and the United Kingdom screen thousands of active ingredients for their agricultural potential. CPFDs around the globe then test these compounds on crops.

“The chemists narrow active ingredients down by looking at the products in greenhouses and growth chambers, but that’s not the real world,” Black says. “We’re the first step in looking at products in a living biological environment — soils, direct sunlight, rainfall.”

Once the field trials are underway, the chemists and other colleagues often tour the trial plots, in what Mroczkiewicz described as a kind of internal outreach.

For Rapicavoli, the tours are an opportunity to be an ambassador for desert agriculture.

“It’s fun when we have our global colleagues from our headquarters out, because some of them have never been to the desert,” she says. “It’s exciting to show them how much production there is in that environment, and all the different crops and diseases we can work on.”

Being ambassadors for agriculture is something else the scientists have in common. When not in the field, they’re available to schools, community organizations and local projects. Mroczkiewicz, for example, writes a column for his local paper and gives guest lectures to college ag classes and at a high school’s FFA® club. He enjoys talking to non-ag groups, too. 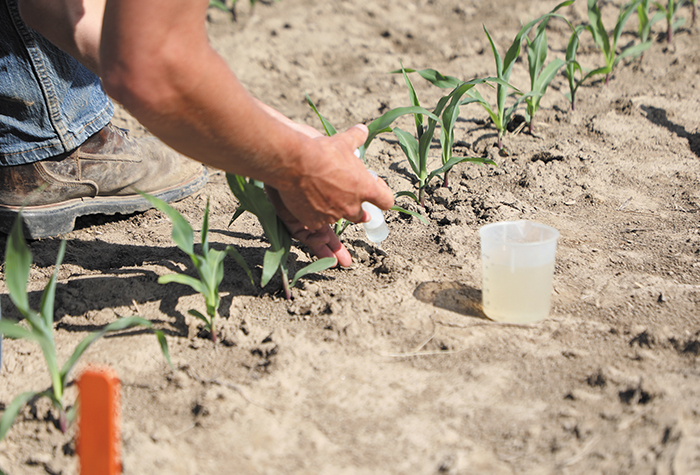 “I spoke to a Rotary club, and they were one of my most enthusiastic audiences because everything I told them was new information,” he says. “I was able to dispel a lot of myths they’d heard about what exactly a genetically modified organism, or GMO crop is, and they got it directly from somebody who has helped develop GMO crops, versus something they saw on Facebook or CNN.”

Nancy Bell, a high school ag science teacher and FFA advisor, has known Mroczkiewicz for more than 20 years and helps with his research alongside her farmer-husband Devon Bell, who has worked with Mroczkiewicz since 2001.

“Steve has a passion for education,” Nancy Bell says, noting that his support of ag in the community includes providing 20 dozen eggs for her FFA poultry unit every year.

Black, who at one time wanted to be a college professor, also enjoys speaking to university students and offering insight on ag as a career.

“A lot of times students just know they like ag and are curious about jobs,” Black says. “We can provide information on what roles in agriculture really entail.”

Rapicavoli, who lives about four hours from her primary research site in Yuma, Arizona, is becoming a community resource there.

“I’m always out there attending local meetings, connecting with growers and university cooperators,” she says. “It’s important to me that I establish myself as a reliable, knowledgeable point of contact.”

Rapicavoli is in year six of her career, while Mroczkiewicz and Black have done the job for 24 and 27, respectively. While they may feel anonymous sometimes, it’s clear they love their CPFD positions.

“It’s such a privilege to work in this role,” Rapicavoli says. “There are only about 30 of us around the country, and sometimes I think, ‘Wow, I get to be one of these people.’ It’s an honor. And it’s never boring, that’s for sure.” t

READ NEXT
A Day with a Crop Protection Field Development Scientist (Video)
Working with technical product leads, tackling weed control and educating students on agriculture – you name it – Steve Mroczkiewicz does it.
➤
Current News & Events
View Video & Photo Gallery
Back to Top
Thrive