This Syngenta leader has lived the American dream and carved a path of success in the industry.
By Danny Vivenzio / Photography by Alex Maness 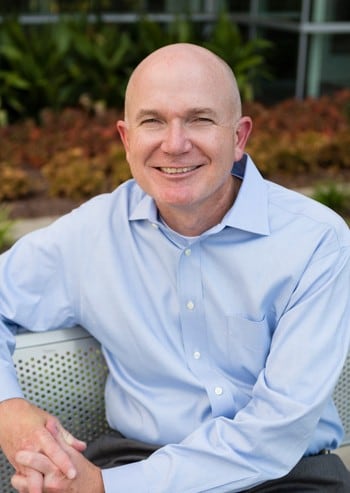 David Hollinrake, president of Syngenta Seeds, LLC, and North America region director, says agriculture is in his blood. Growing up, his parents were farmers. It’s what he and his siblings wanted to be, too.

“I was driving a tractor at 7 years old,” Hollinrake remembers. “I’m one of five kids, and we all worked on the farm.”

In high school, Hollinrake joined FFA, an organization that opened up a world of opportunity for him beyond his family’s farm.

Hollinrake is from Seaton, a small farming community in Illinois, though “small” may be an understatement.

“The nearest town was two miles away. A whopping 100 people lived there,” he says. “When I was a teenager, I went with FFA to the University of Illinois for the first time to attend a conference. Going from the farm to a campus of 35,000 students, which was more people than twice as large as the county I grew up in, was a bit overwhelming to say the least.”

Although he didn’t know it at the time, that trip to Champaign helped set the course of his career. He remembers being so impressed with the university’s agriculture program that when it came time for him to apply to colleges, he only sent in one application—to the University of Illinois. A few months later, the once daunting campus became his home. Although he initially planned to help run his family farm after graduation, his proclivity for numbers coupled with his experiences as a child shifted those plans and prompted him to expand his studies to agricultural economics.

“I grew up in a time when commodity prices were very, very low,” he says. “We had a couple of really traumatic yield events when it didn’t rain for a couple of years in a row. On land that would typically achieve an average yield of 150 bushels per acre, our yields were below 50. This, coupled with sub-$2 corn made for tough times. I saw firsthand how my parents struggled to make ends meet, so they could pay the bills and put food on the table. I wanted to do something that would help give farmers like my parents more certainty.”

It’s Not What You Know

After college, Hollinrake used his degree in economics to gain valuable industry experience at major agricultural companies. More than 20 years later, he is at the helm of one of the world’s largest seed companies, with a portfolio of products developed to help farmers produce healthier, higher-yielding crops. He says advice given to him early in his career partly shapes his professional philosophy today.

“Someone once told me, ‘People don’t care how much you know until they know how much you care,’” Hollinrake says. “I really connected with that because it helped me understand that it’s all about people: What’s on their minds? How can you help them? Unless you connect with people on that level, it doesn’t matter what you do or say.”

It’s that philosophy and his farming roots that make Hollinrake an effective leader in the agriculture industry.


“Farming isn’t easy. Every day, our task is to think about the challenges farmers face: what drives their profit and loss, how they pay their bills, how they create an environment for their family to be successful, and how they leave their operation in a better place for the next generation. We know that we have to add value to their lives each and every day.”

“Farming isn’t easy,” he says. “Every day, our task is to think about the challenges farmers face: what drives their profit and loss, how they pay their bills, how they create an environment for their family to be successful, and how they leave their operation in a better place for the next generation. We know that we have to add value to their lives each and every day.”

Hollinrake’s position at Syngenta gives him a chance to share his journey with young professionals looking to pave their paths in the agriculture industry.

“The role of a leader is to help people understand the potential they have,” Hollinrake says. “I was lucky to have someone in a very senior role sit me down early in my career and tell me that I could lead an organization. He helped me map out the type of experiences that were necessary. I followed that advice to get to where I am today. Now it’s my chance to help other people navigate their careers and overcome the obstacles that they face.”

READ NEXT
Terry Pille: Pillar of the Community
From grower to seller, this Golden Harvest sales representative has dedicated his life to the ag industry.
➤
Current News & Events
View Video & Photo Gallery
Back to Top
Thrive