No Boundaries for Women in Agriculture

The new “FarmHer” TV series spotlights the legacy of women in American agriculture and their growing role on the nation’s farms.
By Matt Lail
It’s no surprise that Connie Banks has made agriculture her life’s work. Growing up on a farm in Iowa, she remembers driving her father’s tractor as soon as her feet could reach the pedals. When it came time for college in 1975, Banks knew she wanted a career in agriculture, even though a number of her friends and relatives advised her to become a teacher—a more traditional career path for a woman at the time.

But Banks was not dissuaded. In fact, her father encouraged her to pursue a career in the industry he also loved.

“Men who work in agriculture are very accepting of women in the industry, because they are used to seeing females in farm roles,” says Banks, an integrated account lead for Syngenta in Amarillo, Texas. “After all, their mothers probably worked on the farm and so do their wives.”

Despite the prevalence and history of women on farms, most people have generally perceived ag as an industry led by men and supported by women. Banks, who has a bachelor’s degree in animal science and ag journalism from Iowa State University, recalls being the only woman on the university’s livestock judging team and in her college ag classes.

But times are gradually changing. According to the most recent U.S. Census of Agriculture (2012), women are the principal operators of 14 percent of U.S. farms, up from 5 percent in 1978. With the census showing women accounting for more than 60 percent of second and third operators, researchers expect additional gains as an older generation of male principal operators retires and more women take charge.

To recognize the growing influence women have on agriculture, RFD-TV has launched a new television series. The brainchild of photographer Marji Guyler-Alaniz, “FarmHer on RFD-TV” puts the spotlight on a small sampling of the many remarkable women in agriculture across America.

“People still think of the farm wife as that person who wears an apron and makes dinner for the hardworking guys,” says Guyler-Alaniz. “Many women do that, but then they hop back on the tractor and get back to work.”

No Boundaries for Women in Agriculture: Illinois grower Courtney Hampton (left) enjoys spending time with her mentor and grandmother-in-law, Sonna Hoke, who is also a grower. 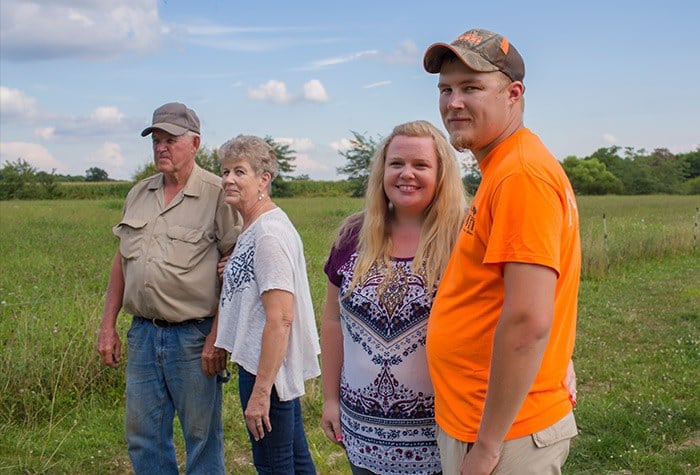 No Boundaries for Women in Agriculture: Hoke, who has worked side by side with her husband for more than 50 years, operates a tractor on their farm. 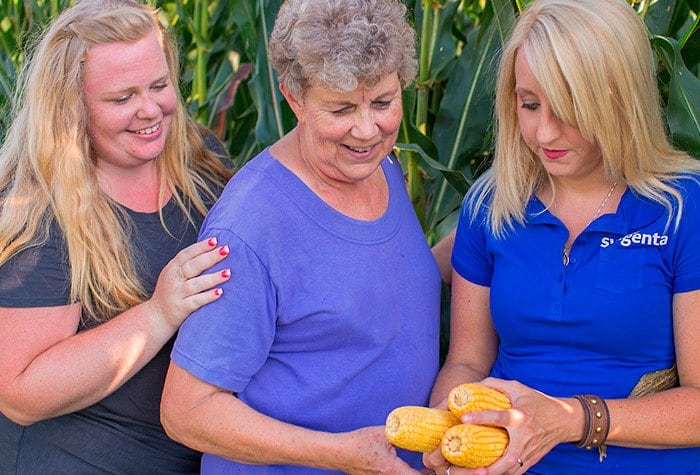 No Boundaries for Women in Agriculture: From left to right: Hampton, Hoke and Forsberg work together to produce a bountiful harvest.

No Boundaries for Women in Agriculture: From left to right: Daniel Olson with Helena Chemical Company, grower Charles Schlabs and Connie Banks with Syngenta discuss the 2016 season in Schlabs’ cornfield near Hereford, Texas. 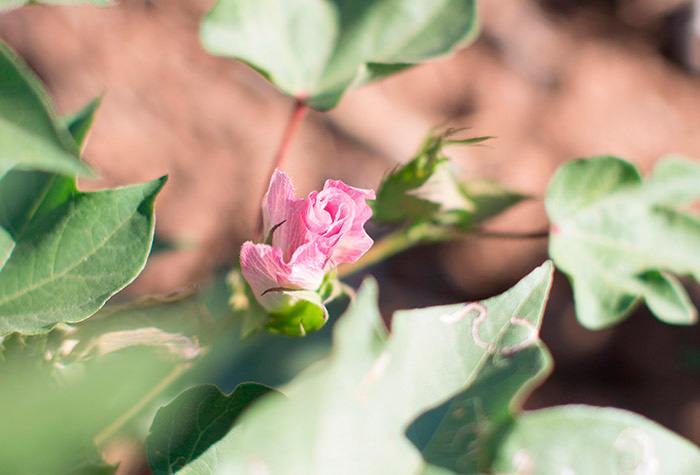 No Boundaries for Women in Agriculture: A cotton plant blossoms near Hereford, Texas. 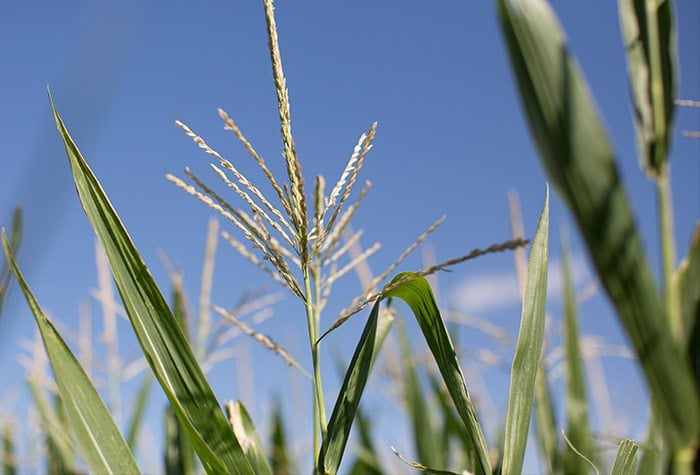 No Boundaries for Women in Agriculture: Corn grows tall in Schlabs’ field. 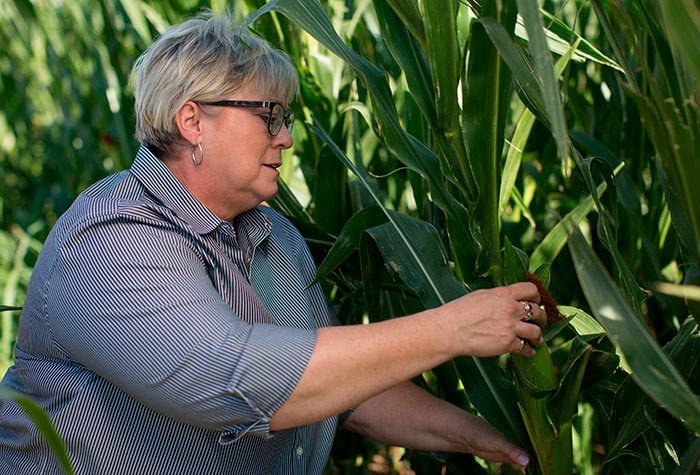 No Boundaries for Women in Agriculture: Banks inspects an ear of corn in Schlabs’ field.

No Boundaries for Women in Agriculture: Banks and Schlab take a break from the busy workday.
Previous Next

As the presenting sponsor of “FarmHer on RFD-TV,” Syngenta has an opportunity to show its support for a crucial segment of the American agricultural community. “Syngenta is so proud and excited to support ‘FarmHer on RFD-TV’ and its ability to tell the incredible stories of women in agriculture,” says Dan Burdett, head of crop protection customer marketing at Syngenta. “Whether they’re working as an agronomist, chemist or retailer, or helping to manage the family farm as their mothers and grandmothers did before them, these women deserve to be recognized for their contributions.”


“Men who work in agriculture are very accepting of women in the industry, because they are used to seeing females in farm roles.”

“FarmHer on RFD-TV” brings to American homes 26 episodes highlighting women in ag from almost every region of the country. One of the 52 women whose stories will air in feature-length 10-minute segments is Ashley Bandoni, a Syngenta retail sales representative and almond grower from Atwater, California.

“I’m so grateful to work for a company that not only embraces women in agriculture, but is also so willing to encourage them,” says Bandoni. “What Syngenta and RFD-TV are doing is a huge step forward in recognizing the contributions women make to our industry every day. I’m hoping other industries will follow in ag’s footsteps.”

In addition to two feature-length segments, each “FarmHer on RFD-TV” episode also includes a “#RootedInAg Spotlight,” a 30-second vignette that takes viewers on a photographic journey of select women whose agricultural roots run deep. Banks is among the 26 women featured in these spotlights, and so are three women—Sonna Hoke, Courtney Hampton and Nicole Forsberg—whose unique working relationship is helping one farm in Clinton, Illinois, prosper.

Hoke and her husband, Ed, have been married for 53 years, but they have farmed together since they were in high school. These days, they manage an 850-acre farm where they grow corn, soybeans, alfalfa and wheat. They are now looking toward retirement and passing on the family farm to their grandson, Andrew, and his wife, Courtney Hampton. Like Hoke, Hampton plans on working side by side with her husband, as they transition to the role of principal operators. “To be honest, I couldn’t think of anything I’d like to do more than farming,” she says.

Forsberg, a Golden Harvest® Seed Advisor™ who runs her own ag seed supply and services company, is a frequent visitor to the Hoke farm. She helps advise the Hokes on which hybrids and varieties to plant, so they can receive the greatest return on their seed investment.

“Building relationships with farmers like Sonna and Courtney is the most rewarding part of my job,” says Forsberg. “They are strong, hardworking women whose friendship and support are making a real difference in my life and the lives of their families.”

The feeling is mutual. “It doesn’t take long for a farmer to talk to somebody and decide if they know what they’re talking about,” says Hoke. “Nicole wins everybody over immediately, because she knows exactly what she’s talking about.”

Inspiring the next generation of female leaders is one of the top priorities for Syngenta and the creators of the “FarmHer on RFD-TV” series. “I would love for this show to be a springboard for young women,” says Guyler-Alaniz. “I want to show women of all ages that if agriculture is their true passion, they can find the right path and follow it.”

READ NEXT
The Story Behind FarmHer
A Super Bowl commercial inspires the founder of FarmHer to create an online community that celebrates women in agriculture.
➤
Current News & Events
View Video & Photo Gallery
Back to Top
Thrive