Congress decides what to support in the expansive legislation known as the Farm Bill.
By Mary Kay Thatcher / Photography by Getty Images
In the next year, we will read and hear a lot more about the Farm Bill. Once passed, the legislation will impact how we raise food, fuel and fiber — and how much risk is involved in those enterprises.

The first Farm Bill was created in 1933 as part of the New Deal. It provided subsidies to farmers during the Great Depression by paying them to stop producing seven main crops in the hopes of decreasing supply, and thus increasing prices, of those crops. The bill also contained provisions related to conservation and support for farmers suffering from the effects of the Dust Bowl.

While the core elements of early farm bills were farm support and conservation programs, a major change occurred in 1973 when Congress added food assistance programs. That change was authored by well-known senators Bob Dole (R-KS) and George McGovern (D-S.D.) — both from big ag states and both prominent supporters of anti-hunger programs.

The senators married these programs because they needed a way to sway urban lawmakers to support a bill that historically benefited rural America. In turn, expanding the Farm Bill encouraged rural lawmakers to support anti-hunger programs that were, at that time, used mostly by the urban poor like the Supplemental Nutrition Assistance Program (SNAP), also known as food stamps.

Nutrition programs, the largest of which is SNAP, comprise 84% of all mandatory spending in the Farm Bill today. The other biggest spending areas are crop insurance (6%), commodity programs (5%) and conservation programs (4%). The remaining 1% includes trade, rural development, research, forestry, energy, livestock and horticulture/organic agriculture. 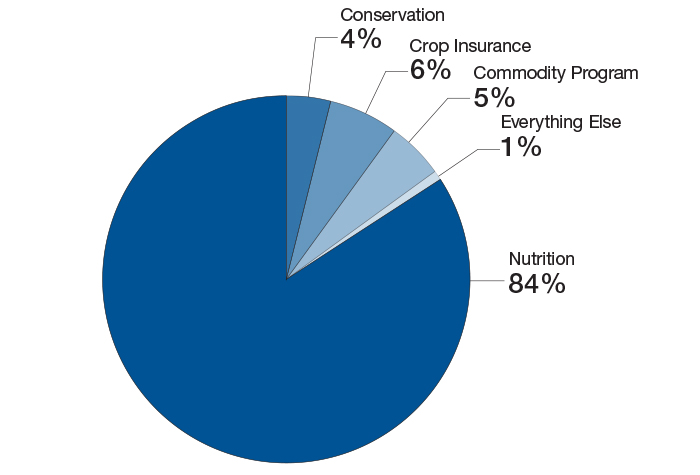 Components of the Farm Bill change every time the bill is re-written, but usually in an evolutionary way rather than a revolutionary one. Today, the commodity programs provide specific forms of income assistance, without interfering with the market, and are compatible with our free trade goals and obligations under the World Trade Organization. Crops covered include corn, soybeans, wheat, cotton and rice; dairy, peanut and sugar producers also have programs.

The primary ag risk management focus is taxpayer-subsidized crop insurance, a tool that farmers in all 50 states can use to cover up to 120 crops in the case of weather and financial disasters. Meanwhile, SNAP helps 41 million low-income Americans afford groceries, and the Women, Infant and Children’s program and school breakfast and lunch programs assist many more.

While the bill still funds conservation programs for land retirement programs like the Conservation Reserve Program, it gives much more emphasis on working lands programs designed to help protect the environment.

It’s much too early to know the outcome of the 2023 Farm Bill, but we do know some things that will affect those decisions:


The Farm Bill has considerable ramifications for farmer livelihoods, national food security and the environment. It’s been said that “if you aren’t at the table, you are on the menu.” Farmers and ranchers who are hungry for adequate risk management programs and environmental legislation that doesn’t limit on-farm economic sustainability need to be at the table.


Congress is set to renew the Farm Bill in 2023. Government relations expert and farmer @ThatcherKay breaks down the bill’s historical priorities and anticipated challenges.

READ NEXT
A Look at the Indo-Pacific Economic Framework
President Biden’s initiative offers potential — if agriculture is a priority.
➤
Current News & Events
View Video & Photo Gallery
Back to Top
Thrive