A Syngenta internship program has proved to be an important steppingstone for college students and a source of important information for growers.


By Chris Harrell / Photography by Steve Williams
“This is a real job with responsibilities, customers and deliverables,” says John Taylor, agronomic service representative for Syngenta. “If you’re not ready for that, then don’t sign up.”

That’s what Taylor tells applicants to the annual Syngenta Citrus Scouting Internship Program, but he knows the interns’ actions speak louder than his words. In 2017, they sampled more than 35,000 trees, helping to provide scouting services for growers whose groves make up about 28 percent of the citrus acreage in Florida. 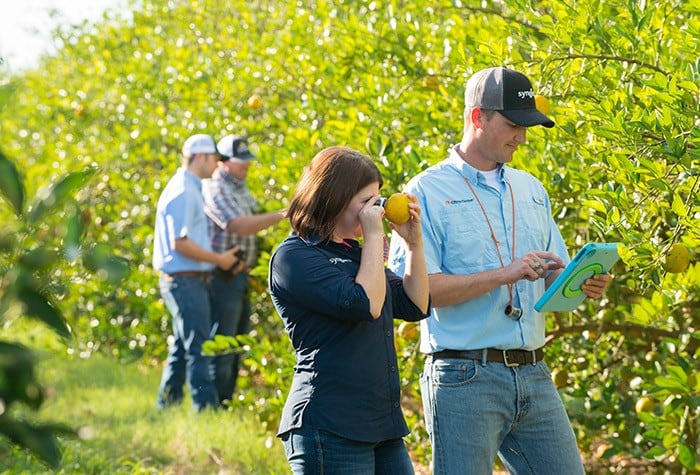 How the Program Works Today

Built on these two initiatives, the current program continues to evolve based on growers’ needs, available technology and interns’ suggestions. Syngenta hires seven interns, who work from May until August in the Sunshine State. Four scouting interns are each aligned with a Syngenta sales representative’s territory. They scout each block they are assigned within their territory every two weeks, monitoring for citrus rust mites, Asian citrus psyllids and leaf miners. The interns generate reports for their growers and sales representative in near-real time.

Two of the interns pull soil samples throughout Florida. The demand for these samples grew, as citrus greening spread across the state and growers became more interested in their trees’ root health. Several years ago, interns pulled 300 or 400 samples in a busy summer. That number is now closer to 2,000.

Zach Langford is a sales representative for Syngenta and former intern. He’s now in charge of the program and says it enables more productive conversations and builds confidence with growers. “We like being able to show a grower data pre- and post-application of our products,” he says. “We know the thresholds going into the application, so we can actually track length of control.”

Minecto® Pro insecticide, launched in 2017, is a great example of this process. Data the interns generated in 2017 showed growers how well it worked in their groves. “We brought Minecto Pro to the citrus market last year, and the citrus intern program provided great support,” Langford says. “The interns were out in the same blocks every two weeks, generating reports before and after Minecto Pro was applied, so growers saw how long and how well it controlled leafminers, mites and psyllids.”

Helping the Best Get Better

Many students sign up for summer internships with excitement, then find the experience they receive is mostly organizing filing cabinets or sweeping warehouse floors. The Citrus Scouting Internship Program is different. The program is competitive, and with more than 30 applicants competing for seven positions last year, only a few are accepted. Asked if the program instills a good work ethic in the interns, Taylor laughs, “They have that when they start. We wouldn’t pick them if they didn’t.”

The program positions students for a successful future by cultivating independence, time management and networking abilities. Interns often go on to become leaders in the industry. Some stay with Syngenta, others become growers or partners in retail or academia, and a few go to work for competitors.


“Any company can put a chemical in a jug, but Syngenta provides growers the service they need to be more profitable.”

What truly sets this program apart is the amount of independence and responsibility Syngenta gives the interns. They work directly with the growers in their territory, providing scouting reports and follow-up if there are additional questions. The interns’ supervisors are available to answer questions, but they don’t tell the interns how to do their jobs.

Cody Hoffman, now a sales representative with CPS in Immokalee, Florida, joined the intern program in 2006. He learned how growers operated their businesses and how to talk to them—skills he uses today. “No one told me where to be every day, because that wasn’t the point,” says Hoffman. “I learned to be efficient and organize my territory. It was hard work, but it was very rewarding.”

The program demands the interns develop good time-management skills. The size of the territories they cover, along with variables like weather and spray schedules, require organization and flexibility. For many, this is an empowering experience.

Morgan McKenna, who grew up in a citrus farming family, interned in 2012 and 2013. Now she’s a sales representative with Syngenta and manages the data the interns collect. She enjoyed the internship’s structure so much that she returned for a second summer and then took a full-time position with Syngenta. “It was the first time in my life that I didn’t have a parent, teacher or somebody telling me how to accomplish my tasks, and I loved it,” says McKenna.

The most tangible benefit the internship provides is the opportunity to network in the industry. Interns meet a lot of people—Syngenta employees, growers and other industry leaders—who are valuable contacts for students about to begin their careers.

Matt Yeomans, citrus harvesting supervisor with A. Duda & Sons, Inc., interned in 2002. He says the internship broadened his view of the citrus industry beyond what he’d seen locally and helped him mature. “If we have an applicant we don’t already know and they went through the internship program, it carries some weight if John or Morgan says that applicant would be a good hire.”

When growers place their trust in a company’s products, there’s an understanding that the company will stand behind those products. The Citrus Scouting Internship Program is a manifestation of that understanding, and growers seem to appreciate it.

Lindsay Raley, president of the Dundee Citrus Growers Association, knows firsthand the importance of the internship program. Syngenta interns have monitored rust mite populations in his groves for several years. “The interns are very dedicated, and they get me the information I need in a timely manner,” Raley says.

The program is a lot of work for a lot of people. The interns work hard all summer. Syngenta employees spend extra time recruiting and training participants. But in the end, it’s citrus growers who give the program purpose.

“I’m no longer working on my family’s farm, but I know a grower’s dollar is precious,” McKenna says. “My first year as an intern, John taught me that we need to be more than active ingredients. Any company can put a chemical in a jug, but Syngenta provides growers the service they need to be more profitable.”


Note: The opinions of former interns are based solely on their own experiences and do not necessarily represent the opinions of their employers.