“It’s taken me years of experimental farming to find just the right formula,” Prescher says. “This honor is the result of daily dedication to my work with Syngenta and applying what I have learned to my fields.”

According to a U.S. Department of Agriculture crop report, the 2016 Minnesota corn yield was projected to average 184 bushels per acre (bu/A). This was the state’s second-highest yield prediction ever, and yet Prescher surpassed it by more than 100 bu/A with Golden Harvest hybrid G10S30-3220 brand, hitting 288.6 bu/A.

A lot of hard work, careful calculations and field consulting led to Prescher taking home top honors in the 2016 National Corn Yield Contest’s Minnesota AA Non-Irrigated category. It actually started back in 2009, when he enhanced his fields by installing drainage tile lines.

“We wanted to bring our yields up, so we started grid soil sampling and variable-rate fertilizer applications,” he says. ”Those were the foundational practices.”


“These days, agriculture is becoming so technologically advanced that having a willingness to try a new management approach can lead to a big field win.”

That was only the beginning. In preparation for the 2016 planting season, Prescher analyzed yield studies and chose a Golden Harvest hybrid with the Agrisure Viptera® trait for comprehensive insect control. He also made sure he planted his corn at the proper depth and applied a broad-spectrum herbicide, along with early-season and at-tassel fungicides. In addition to these crop-protection inputs, his spray regime included prescribed nitrogen and sulfur applications.

Getting the timing right was also critical, Prescher says. Fields planted a week earlier than his winning field didn’t do as well because of the cold soil conditions. Planting when the soil was ready and tilling the ground during the right window were important early decisions that helped him break yield barriers at the end of the season.

Success Starts From the Ground Up

Like Prescher, Doug Kirkbride preaches the importance of agronomic considerations every day. As a Golden Harvest agronomist based in Pana, Illinois, Kirkbride is on the front lines when it comes to helping farmers place hybrids and varieties in the right fields.

Given commodity prices for corn, he recognizes that some farmers want to “cut, cut and cut” inputs. But he advises them to use a more moderate approach that takes field history into consideration. “For example, if planting continuous corn acres, the chances for corn rootworm will be higher,” he says. According to Iowa State University Extension, farmers can expect a 15 percent yield loss on average for every node of roots pruned by corn rootworm larvae. A hybrid featuring a trait, such as Agrisure Duracade®, may cost more upfront, but it can end up delivering a larger return than lower-priced hybrids. 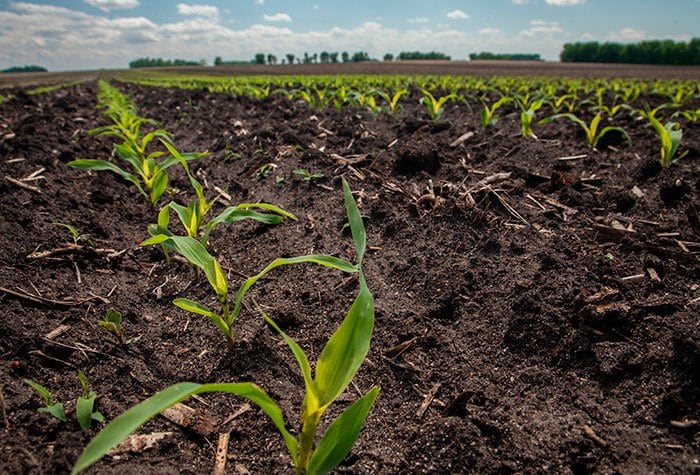 “Rather than completely reducing the quality of your inputs by choosing all conventional hybrids and foregoing fungicides, try another alternative,” Kirkbride says. “For example, take a small portion of the farm and try different trait, chemical and fertility input programs on fields that are easy to access for in-season scouting. This will provide an on-the-farm testing ground, so you can see for yourself and set yourself up for the greatest chance of high yields and ultimately higher profits.”

John Flynn, a Golden Harvest agronomist in Nebraska, builds on Kirkbride’s advice. “Traits are very nice to have, but you also need to have the right seed in the right place,” he says. “If it seems like you always pick the right hybrid or variety a year or two too late, I recommend choosing three to five options to help diversify and spread risk.”

When possible, Flynn says he advises farmers to choose ear-flex hybrids to maximize yield. Unlike determinant and semi-flex offerings, ear-flex hybrids have the potential to increase the number of kernels down and around, which can translate to more corn in farmers’ hoppers at harvest.

After farmers select and place hybrids and varieties, Kirkbride says their attention should turn to fertility. Proper soil fertility is critical to maximizing yield potential of a crop. It first starts with the proper soil pH level to optimize soil fertility available for uptake by the plant’s root mass.

“As the hub for plant nutrient intake, the larger a root system, the greater chance a crop has of reaching its full yield potential,” Kirkbride says. “I’ve seen young corn and soybean plants that start off looking good above ground, but soon turn into a mess because of what’s going on below ground. Oftentimes, that’s because the soil pH wasn’t properly maintained and nutrients were limited.”

While agronomics are critical to success, staying open-minded is also key, Flynn says. “These days, agriculture is becoming so technologically advanced that having a willingness to try a new management approach can lead to a big field win,” he explains. “I encourage farmers to attend trade shows, visit field events and read magazines, so at the very least you have a chance at being exposed to the latest and greatest products.”

Another way farmers can stay in the know is reaching out to experts in their area, Kirkbride says. “The most rewarding part of my role is developing relationships with farmers and helping them solve crop problems. So I always encourage them to call or email—whether that’s me, another agronomist or their Golden Harvest independent Seed Advisor™, who is trained to be a local field expert,” he says.

Prescher agrees and credits teamwork for his recognition in the National Corn Yield Contest. “I’m thankful for the family, friends and colleagues who have helped me along the way,” he says. “The yield win was a collaborative effort. Now it’s time for us to break last season’s record and reach 350 bu/A.”

READ NEXT
Ag Groups Defend Funding for the 2018 Farm Bill
The political and economic environment is unsettled, as work begins on the 2018 Farm Bill.
➤
Current News & Events
View Video & Photo Gallery
Back to Top
Thrive