Growers remain resolute as the search for solutions to citrus greening continues.

Huanglongbing (HLB), more commonly known as citrus greening, is a systemic bacterial disease and the greatest current threat to not only Shinn’s groves, but also the entire citrus industry.

“We used to have a stable business. In bad times, you could skip a fertilizer or foliar spray and get by,” Shinn says. “If you skip anything now, your trees may become more susceptible to citrus greening, which could kill them.”


Growers remain resolute as the industrywide search for solutions to #citrusgreening continues.

The first documented occurrence of citrus greening in the U.S. was in 2005, when a scientist detected the disease in a south Florida nursery. In just three years, HLB spread to every citrus-producing county in the state. As experts searched for solutions and growers fought to stay in business, the incurable disease advanced west. Now, the U.S.’s other two largest citrus-producing states, Texas and California, report an acceleration in the spread of the disease.

The Asian citrus psyllid, an exotic pest responsible for the rapid spread of citrus greening, is the exclusive vector of the pathogen. As this tiny, winged insect feeds on the leaves and stems of citrus trees, it transmits the bacteria that cause the disease. The bacteria infect the tree’s phloem—vascular tissue that transports sap throughout the tree—triggering root loss and impeding nutrient uptake. The result is loss of tree vigor and resiliency, along with unripe, bitter, green and misshapen fruit that are prone to excessive preharvest drop.

“Citrus greening can cause trees to lose about 40 percent of their root mass, which can drastically and rapidly reduce production,” estimates Mike Irey, director of research at Southern Gardens Citrus in Clewiston, Florida. “The industry has suffered everywhere greening is found; and despite a lot of ongoing research, no one has successfully found a solution to get infected trees back to full production.”

In addition to the absence of a solution, there are other important factors in the steady spread of citrus greening. Citrus trees have zero tolerance to the HLB pathogen, and disease symptoms may not manifest for two or more years after infection. This allows ample time for undetected spread of the disease.

“It only takes one insect to pass the bacteria between trees,” says Elijah Meck, Ph.D., technical product lead for insecticides at Syngenta. “Even with very efficacious products, without 100 percent control, there is potential for an infected insect to spread the bacteria.”

Growers are employing tactics to mitigate the effects of this devastating disease, such as removing infected trees, replanting new trees on high-density blocks, spending more time scouting, and increasing applications of fertilizer and foliar insecticides. Despite the extra work that Shinn and fellow growers have poured into their groves, impacts on the U.S. citrus industry have been significant. 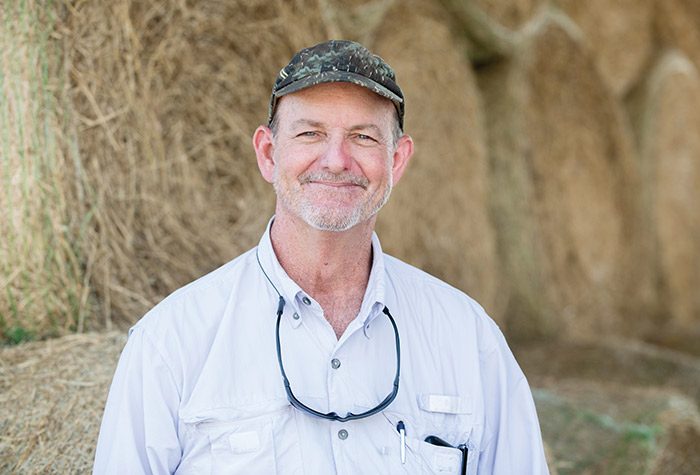 Industry Fights Against Citrus Greening: Shinn, whose family has grown citrus for four generations, stands in front of hay bales on his farm. 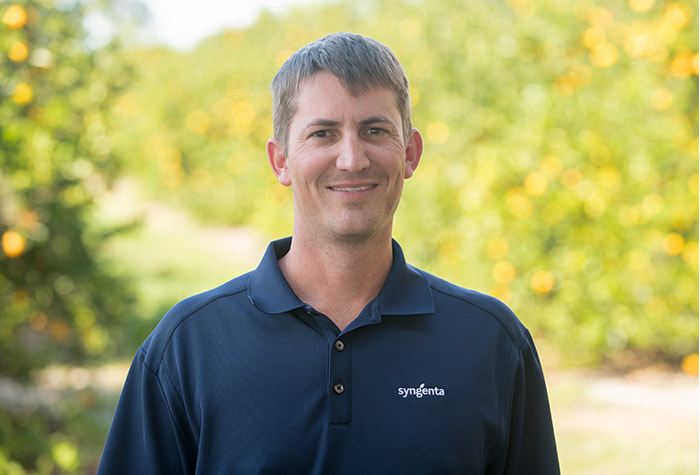 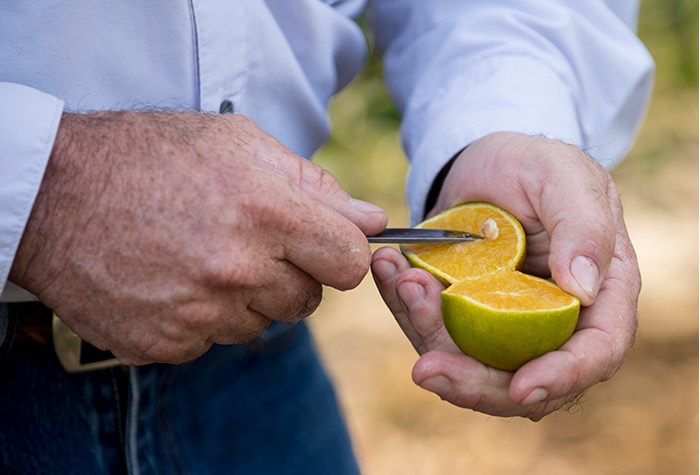 Industry Fights Against Citrus Greening: Shinn inspects an orange for any telltale signs of citrus greening, a disease that has devastated the Florida citrus industry. 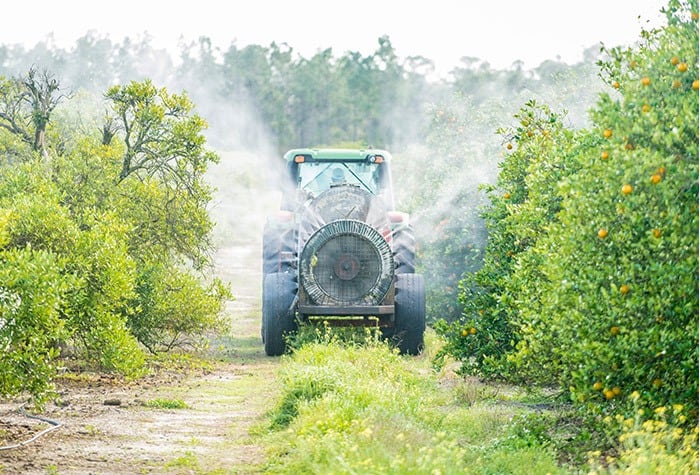 Industry Fights Against Citrus Greening: Insecticide applications that help control the primary vector of the disease, the Asian citrus psyllid, are an essential part of good grove management. 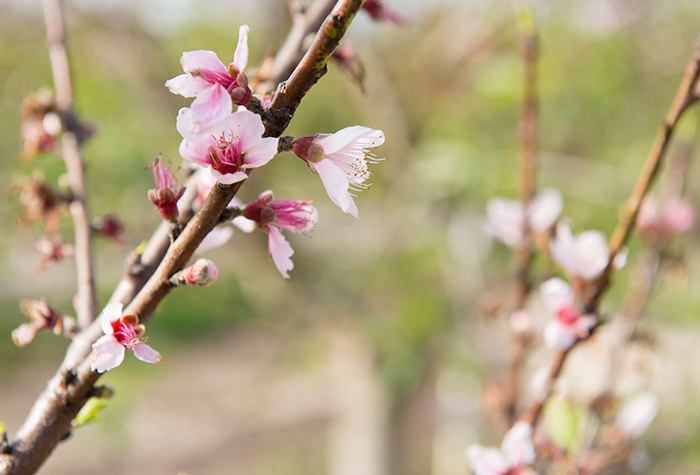 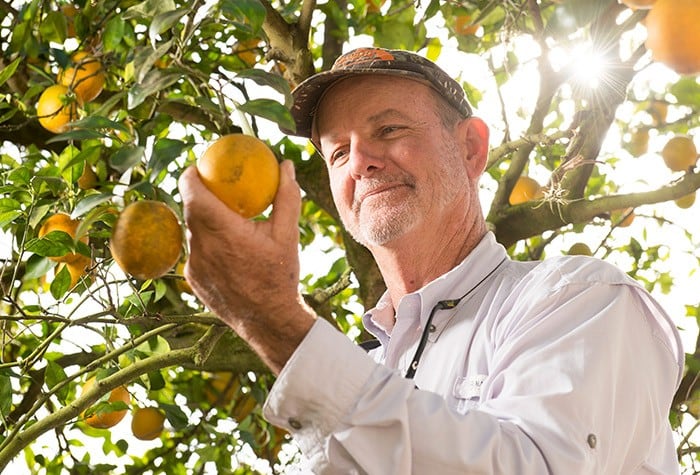 In 2014, about six years after citrus greening reached epidemic levels in Florida, Shinn managed 1,200 acres of citrus groves. Since then, increasing costs have reduced his acreage to 550 acres.

“Before greening, caretaking costs were about $800 per acre. We’re now up to $2,000 per acre,” Shinn says. “We’ve had to back off acreage to cover the cost of caring for the rest of our groves. We’re picking about a quarter of what we were picking five years ago.”

Shinn’s experience is not unique. The University of Florida reports that citrus production in the state decreased by 70 percent from 2004 to 2016. Approximately 34,124 citrus industry jobs have been eliminated, and lost output is estimated at $4.6 billion.

Thus far, impacts on the Texas and California citrus industries haven’t been quite as drastic. Some experts, however, caution the effects could become worse.

“Florida citrus is used primarily for processing and juice,” says Garrett Gilcrease, agronomy service representative for Syngenta in Southern California. “But California citrus is all fresh market, so market decline for us has the potential to be much quicker than Florida’s.”

In the meantime, Syngenta is doing its part to support citrus growers.

“Our business is to solve problems for farmers,” says John Taylor, agronomy service representative for Syngenta in Florida. “We do that through our products, services and expertise.”

The Syngenta Citrus Scouting Internship Program, which provides valuable data about pest populations to growers and helps them make informed decisions about application timings, is one demonstration of this commitment.

“We stand beside growers when times are tough, and it makes me proud to work for Syngenta,” says Morgan McKenna, sales representative for Syngenta in Fort Myers, Florida, and former intern, whose family produces citrus in the state.

“Cyantraniliprole provides a different mode of action for sucking pests,” Meck says. “It will still control lepidopteran pests like citrus leafminer similar to that of the first-generation diamides, but it also has an extended spectrum to give growers more control over thrips, psyllids and adult root weevils.”

Meanwhile, abamectin targets citrus rust mite as well as other important mite pests of citrus. “By combining it with cyantraniliprole, we can now offer citrus growers a much-needed tool that protects their trees against multiple overlapping pest populations, including the Asian citrus psyllid,” Meck says.

A Look to the Future

Experts remain optimistic about the viability of the industry, as the search for a solution to HLB continues. “Growers have found little things that can help manage the disease, such as optimizing nutrition and soil pH,” Irey says. “We hope to have resistant varieties in the future, whether bred through traditional means or via biotechnology.”

Shinn, who won the 2018 Agricultural-Environmental Leadership Award from the Florida Department of Agriculture and Consumer Services, has diversified his operation and now grows peaches in addition to citrus. Still, he admits that he has concerns for the future of his groves.

“I’m scared every day. Our profit margin is already so thin,” Shinn says, “But this is all I want to do, so I’m going to keep fighting the battle.”

Like the generations that came before him, Shinn proves the old Will Rogers’ adage, “The farmer has to be an optimist or he wouldn’t still be a farmer.” This year, Shinn’s putting in two new citrus blocks and another next year.

“Despite my fears, I’m hopeful,” he says. “I think we’re moving in the right direction for the first time in a long time.”